Each state is presented by a story, then a vocabulary and comprehension page, next a map with questions, and finally a chart, table, graph, or another type of activity which presents information to the reader.  Most stories deal with a historic topic. The stories are about men and women from different racial groups who have helped build this nation. The words and questions on the vocabulary and comprehension page are to be used in conjunction with the story.  The map shows some of the major cities, rivers, and products of that state.  The charts, tables, and graphs present information for students to read and use.

These four workbooks provide an excellent overview of U.S. history and geography. 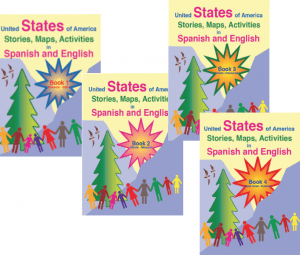 Visit us on line at www.Fisher-Hill.com to learn more about our United States of America Stories, Map, Activities in Spanish and English and to download sample pages from each workbook.

Summer is a Good Time to Learn Spanish!

Login to Fisher Hill
Reset Password
Enter the username or e-mail you used in your profile. A password reset link will be sent to you by email.