Fisher Hill’s two workbooks called U.S. Citizenship for Spanish Speakers are on sale during the month of April. The books are only $12.00 marked down from $15.95.  Visit us on line at www.Fisher-Hill.comand put in the coupon code 4118 on the check-out page.

U.S. Citizenship for Spanish Speakers by Fisher Hill is an excellent two workbook series for Spanish speakers. These workbooks can be used as a stand-alone program or as a supplementary aid to give Spanish speakers extra practice in U.S. history, government, integrated civics, English writing and reading.

To become a U.S. citizen, a lawful permanent resident must:

The filing fee is sometimes waived for applicants with family incomes below 150% of the poverty line or if the applicants are experiencing a financial hardship that prevents them from paying the fee (such as unexpected medical bills. 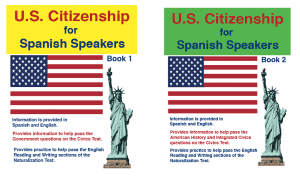 English for Legal Residents from Mexico