English Speech SoundsI taught kindergarten and first grade for seventeen years. Reading was my specialty. Both my boys had difficulty learning to read. This came as a surprise since I had read stories to them since they were babies; and both had gone to Mommy and Me classes since they were infants. Still they had difficulty learning to read. So I joined the International Dyslexia Association and learned how to teach reading.

In my kindergarten and first grade classes, I used a very systematic, explicit approach to teaching english speech sounds for reading and spelling. Some people call this phonics; others call it the alphabetic principle. It’s important students know these sounds with automaticity (very quickly).

In last week’s blog, I talked about Fisher Hill’s English Literacy Program and said that my next blog would be about the 44 English Speech Sounds.  When using Fisher Hill’s English Literacy Program, it is important to use and complete English Reading and Spelling for the Spanish Speaker Book 1 first. In this book, students begin to learn the 44 speech sounds.  When using this series  it would be a good idea to buy or make sound cards, so the students can practice these sounds. Sound cards look like these.

Below are the sounds for the consonants. In the English alphabet there are 21 consonants and five vowels. Most consonants make one sound. Each of the five vowels make several sounds. The letter y is sometimes used as a vowel.

The letter c is the first choice for the /k/ sound at the beginning of a word.

The letter c has the soft sound /s/ when followed by e, i or y. For examply city, rice, cyclone.

The letter g has the soft sound /j/ when followed by e, i, or y. For example: gentle, gym, fringe.

The letter s makes the /s/ sound as in snake. It can also sound like the letter z at the end of many words. For example: his, dogs, brothers.

The letter q is always followed by a u and one or more vowels. For example: quit, quack, queen.

In my next blog, I will continue with the different english speech sounds. All the 44 sounds are introduced and practiced in Fisher Hill’s series English Reading and Spelling for the Spanish Speaker. 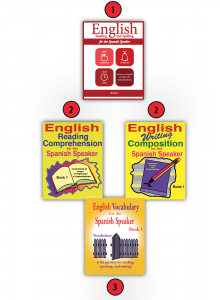 Visit us on the web at www.Fisher-Hill.com to learn more about our English Literacy Program for Spanish speakers.